and you think YOU’RE having a bad day (6)

Many of us intuitively recognize the subtle connection that exists between all human beings, and with all of nature. This field of awareness has something to do with our minds, but much more to do with our hearts.

I recently chanced upon a subject of discussion with someone, that led to my meeting, for the first time in my life, with two sisters and a brother who I’d never had contact with (fifty years late, but maybe at the exact time it was meant to happen). This took place during a short visit to Canada. A few months later, I made a new friend while in Cyprus. During a lull in an after-dinner conversation, I suddenly started talking about my small ‘miracle’ in Canada to him. It turned out that this man also has a brother who he has never met, and who happens to live in my place of residence, Austria. By ‘chance’, I know the head of personnel at the company that his brother works for, which may lead to the healing meeting of these two separated siblings.

Yesterday, I connected with an old friend via Facebook, who I hadn’t seen in about thirty years. We exchanged a few sentences of enthusiastic, typed dialog in the tiny chat-box. Of all the things he chose to mention in these moments, was the fact that he lives near another old friend who I also hadn’t seen in years. I told him – amazed – that twenty-five minutes before I had just looked up that same person in a public internet search site, and phoned his home to say hi!

I have the feeling that this Power/Universe/Spirit manifests in our lives when we need to experience constructive inner growth and healing. In fact, judging by the many similar experiences I’ve lived and heard about in my travels, these compassionate nudges are becoming more and more frequent in people’s lives. Could we be entering a time when all the invisible beauty inside us shines out, when the collective consciousness of universal love unites us and puts an end to jealousy and aggression?

Things may get temporarily worse before the break-through, but there is no doubt in my mind – and heart – that a sunrise is coming that no generation will ever forget. 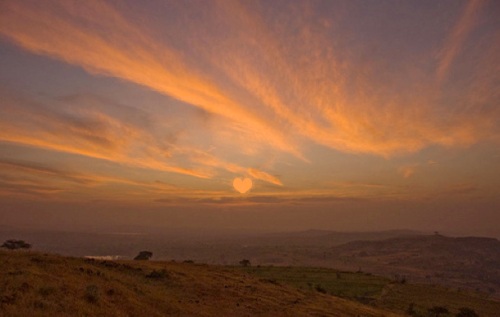