The two most crippling attitudes in our so-called advanced culture are guilt and un-forgiveness. These are the two sides, one dark and the other glaring, of an unlucky coin. The more guilty and insecure we feel, the more we try to justify our existence through unnecessary aggressiveness. On returning home to Vancouver after fifteen years in Vienna, I was surprised to discover how many old friends had completely stopped talking to certain family members because of some minor disagreement between them. When a sliver of inferiority is imbedded deep inside of someone, it’s impossible to maintain the flow of love that would normally generate in the heart. (The internal energy center in a human being that is directly handicapped by guilty feelings, the left vishuddhi chakra, is located just above the heart.) This is how most marriages shatter. When your own unconscious image of yourself is that of a kicked dog, it’s difficult to feel the goodness in others. Once the raging motor of ego kicks in (right agnya chakra), the chances of slipping back into a natural state of benevolence are not likely. Wouldn’t it be great to have a button to push, that would shift your machine back into a smooth gear? You have one.

There is a benevolent, motherly energy in each of us that, once awakened, nurtures the intricate affairs of our subtle insides. With the simplest sincere wish to know ones true self, combined with the slightest contact with the subtlest vibrations, the subatomic building blocks of Creation which can be felt via the human nervous system as a cool breeze, one can instantly reach the state in which we are linked to the all-pervading power that will constantly recharge our worn batteries. You change from a closed, stagnant system, to a plugged-in instrument with all the same valuable attributes as that unlimited Source. This is the first button. Then you get a whole range of active keys and switches that were previously only dormant. 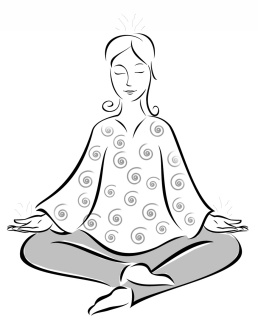 One of these keys is that which selects a healthy, constructive self-image. Normally, an affirmation or prayer is something spoken (with good intentions) into a disconnected phone. After self-realization, you have your own, personal connection to the inexhaustible reservoir whose nature it is to answer promptly and fix without cost – more efficient and user-friendly than the best on-line device! I’ve been married for twenty-one years, and sometimes I’d like to give my wife a brain transplant when she’s disagreeing with me. Sometimes we walk away angry. But, with a childishly simple correction of the vibrational imbalance, fun and humor can be instantly restored. (And when I’m driving, there are moments in the line of fire of an aggressive motorist when I wish I had a James Bond car that fires rockets. But, with a wave of the hand and a gentle re-orientation of the attention, the cool, calming balance washes in, dispelling the fiery illusion.) It’s very easy to decode subtle obstacles to well-being with an enlightened nervous system. As soon as the inner festive tree-lights are turned on, all your beautiful decorations are discovered. It only takes a few minutes a day of regular meditation to feel and learn how to use all the inherent tools that are built in. The key that removes unnecessary feelings of guilt has many options, and can lift you out of countless complex dead-ends. The same with the switch that deals with your sometimes naughty Mr. Ego. These methods are possible because the hands and the attention become powerful instruments that are capable of directing these vibrations to correct any troublesome problem. Sounds too easy? When you’ve tasted the juice of thoughtless-awareness, a fruit like no other, you’ll never go back to cheap soft-drinks. Just try it and see what happens after you’re connected. The difference will overwhelm you.

One response to “two drops of simple, practical advice”